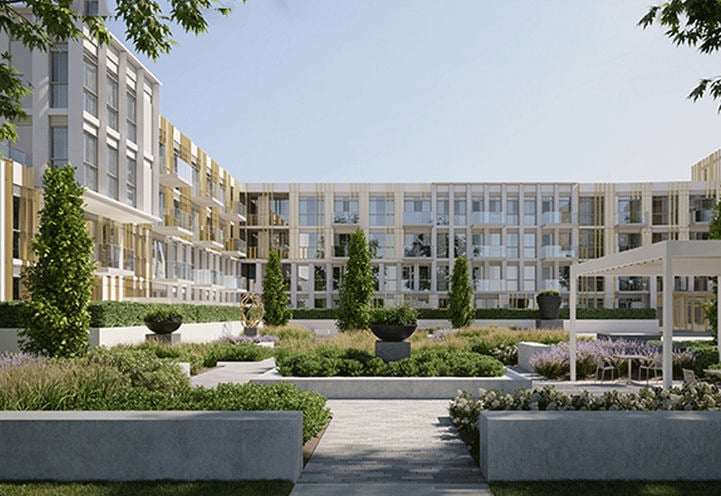 Uptown Oakville
Situated at Dundas and Eighth Line, The Wilmot is set amid the growing uptown core of Oakville. Enjoy a plethora of amenities, including big box stores, schools, grocery stores and restaurants just minutes from home, as well as green space, rivers, trails and parks. The Wilmot offers the best of urban living and suburban quiet, all with easy access to the natural outdoor escapes of Oakville. 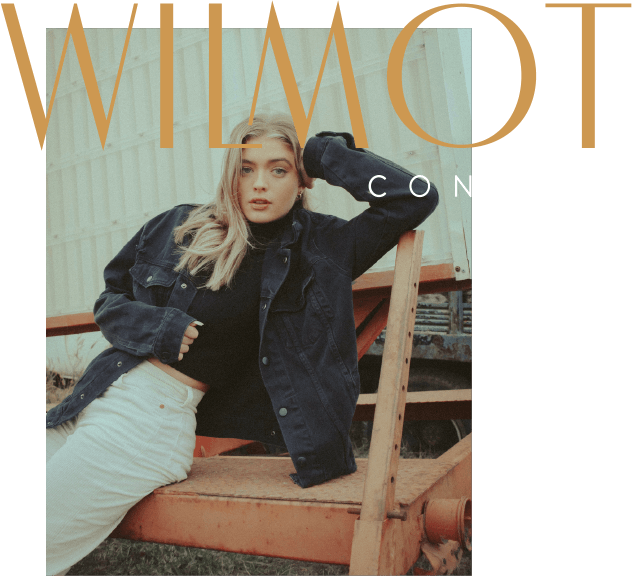 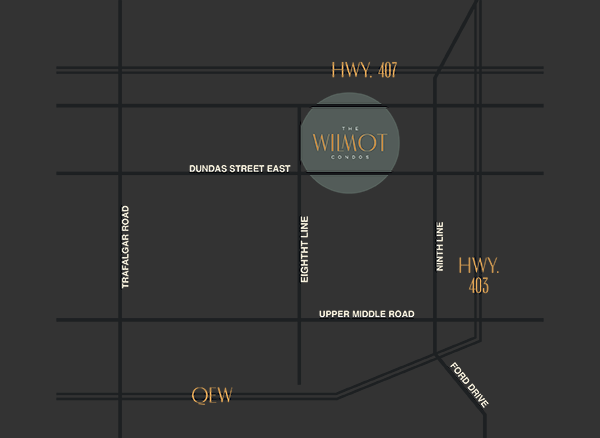 The Wilmot Condos is a new condo project by WP Developments and is currently in pre-construction. The Wilmot architect is designed by Baron Nelson Architects. The new project will be located at 1005 Dundas Street East in Oakville. The major intersection is Dundas Street East & Eighth Line.

The Wilmot is less than five minutes away from the 403 and the QEW, and just 30 minutes from downtown Toronto. Take full advantage of Oakville’s transit which can take you to any of the nearby educational institutions, including Sheridan College Campus, or the world class healthcare at the Oakville Trafalgar Memorial Hospital.

Located in Oakville which was recently ranked “Canada’s Best City to Live” by MoneySense magazine in 2018!

Enjoying the great outdoors comes easy having over 300 km of trails, parks, and forests surrounding the development such as Postridge Park, Oak Park, Nipegon Trail and so many more

Quick 5 minute commute to Sheridan College Trafalgar Campus which is home to more than 9,500 students

The Wilmot Condos is an 8 storey mid rise residential building that features urban architecture and designs conveniently nestled in Oakville’s popular and quickly growing uptown core. The city has previously been voted the best place to live in Canada due to its high connectivity to lifestyle amenities, natural green spaces, prestigious educational institutions, and commuting options.

Oakville’s uptown core community is a highly desirable and quickly developing area of the city. The Wilmot Condos will be the area’s newest luxury mid rise residential building being built conveniently close to some of the city’s best lifestyle amenities. Residents will be located just minutes away from the bustling uptown core and many vibrant dining, shopping, and entertainment options including local and Big Box brands. Everything you will need is situated so close to home. Major nearby attractions include golf courses and a drive in movie theatre.

Rural Oakville is such a beautiful part of the city, surrounded by natural green spaces, lush parklands, conservation areas, tranquil waterways, and nature trails that can be explored and enjoyed all year round. Lake Ontario and the city’s stunning waterfront is just a short drive away from The Wilmot Condos.

The Wilmot Condos is conveniently situated in an extremely family friendly neighbourhood of Oakville, making it the perfect place for families with children of all ages to call home. The city is home to some of the province’s best early learning centres, public, and private schools, some of which are located just minutes away from home. State of the art recreational facilities and community centres offer a wide range of indoor and outdoor sports and activities, catering to all interests. Sheridan College is also located just minutes away from the Wilmot Condos, making it the perfect off campus living accommodations for post secondary students.

The Wilmot Condos is also a perfect option for professionals and commuters looking to live outside the big city but also still have easy access to the GTA. Motorists are centrally located between some of central Ontario’s major thoroughfares including Highways 407, 403, and the QEW. For residents that prefer to travel using public transportation GO Transit and Oakville Transit bus routes are conveniently accessible just steps away from the front door. The Oakville GO Transit station is located just a short distance from home where riders will be able to take the GO Train into Union Station in under 40 minutes.

WP Development is a Toronto-based land developer, established in 2013. Since their inception, they have kept one thing at the core of their proposition: “to develop with our clients and for our clients, prioritizing quality over profit”. They are committed to building communities and delivering quality products, exceeding clients’ expectations. They develop houses, condos, townhouses and more for a range of clients – from homeowners to investors and beyond. While they do follow current housing trends, they are unafraid to explore on the quest to make new discoveries.

The Wilmot Condos is a pre-construction new condo development by WP Development Inc. With a total of 380 units. Coming soon to 1005 Dundas Street East in Oakville.

The Wilmot is an eight-story condominium with 380 suites located near Oakville’s uptown core. The suites are available in a variety of layouts, ranging from one to two bedrooms to one to two bedrooms plus dens. The Wilmot is a especially a blend of forward-thinking architectural and urban design practices. With a 24-hour concierge, smart features throughout the suites and common areas, a tech lounge, as well as fitness facilities.

Highlights at The Wilmot Condos

The Wilmot Condos is named after the area’s original surveyor, Samuel L. Wilmot. He laid the foundations for Oakville, while blending the area’s heritage with its aspirations for a future city. The Wilmot celebrates this marriage of history and modernity.

The Wilmot is located at Dundas and Eighth Line in Oakville’s growing uptown core. Enjoy a variety of amenities such as big box stores, schools, grocery stores, and restaurants just minutes away, as well as green space, rivers, trails, and parks. The Wilmot offers the best of both urban and suburban living, with easy access to Oakville’s natural outdoor escapes.

Here, you’re only minutes to any of the nearby educational institutions, such as Sheridan College Campus, or the world-class healthcare at Oakville Trafalgar Memorial Hospital by Oakville’s public transportation..

The Wilmot Condos is proposed to be an elegant mid-rise condo bringing elevation to a mostly low-rise neighbourhood. The proposal consists of two residential buildings fronting onto Eighth Line and Dundas Street East and will feature a central courtyard. The towers should rise between 5 and 12 storeys and will feature varied elevations to ensure privacy from the public realm.

The combined unit count will total 562 condominium dwellings with a wide range of housing opportunities and a variety of unit types and sizes. The units will be available in 366 1-bedroom units, 168 2-bedroom units and 28 3-bedroom units.

The building will feature 708 square-metres of indoor amenity space, and a three-level parking garage. The garage will house 758 parking spaces (618 resident and 140 visitor) as well 200 bicycle parking spaces.

The buildings façade incorporates architectural elements and materials such as a blend of glass, textured panels, metal cladding, and textured concrete that creates a dynamic modern design and enhances its appearance along the public realm. The eye-catching design stands out in contrast with the surrounding developments style to create a landmark in the area and promote the intersection as a gateway into north Oakville.

This development will also be created with multiple sustainable features in mind, we see more often sustainability is becoming a common theme in real estate. With that said, each unit will feature a balcony for private amenity space and the buildings will have a combination of active terraces, green roofs.

The towers will also feature white albedo roofs to reduce heat island effect as well as provide at-grade and rooftop outdoor amenity space to residents and visitors. The buildings will also include landscaped features such as native/non-invasive plant species and drought tolerant plants to keep up with the lush green surroundings.

The Wilmot Condos will be located in Halton Region’s rapidly growing town, Oakville. The site will sit right at the entrance of the near Trafalgar and Dundas. Investors can expect major growth from Oakville in the coming years as the city has many government and city implemented plans and goals.

In 2016 Oakville’s population clocked in at 193,832 residents, a 6.2% increase since 2011. This growth has outpaced that of Toronto, which only grew by 4.5% over the same time period. It’s estimated that by 2031, that number will grow to approximately 255,000 people.
Oakville is a family-oriented suburban region, with lots of growth potential. This area is traditionally regarded as a place full of low-rise detached housing. Detached homes accounted for 91% of home sales last year, followed by farms with 6% and rural homes at 3%. But as we so often see the condominium trend is slowly making its way into the town.

Here you’ll find many reputable elementary and secondary schools in this pocket, which has one of the highest ratios of private schools to student populations in the country. There are also a multitude of parks in the area, the one’s in walking distance include Postridge Park, Dalebrook Park and Memorial Park. The town also hosts multiple local events such as the Downtown Oakville Jazz Festival, Waterfront Festival, For the Love of the Arts Festival, Midnight Madness, and the Oakville Family Ribfest.

The Dundas and Trafalgar intersection acts as the region’s main commercial district. The whole area serves as a one-stop-shop for residents. There are major retailers here, such as Canadian Tire, Walmart Supercentre, The Keg, Kelsey’s Original Roadhouse, and Nando’s as well as cafes, banks, and liquor stores.

WP Development creates a better future. Our tenets innovation, integrity and sustainability help us deliver quality in every community we build while respecting existing neighbourhoods and environments. Purpose comes with responsibility. We strive to exceed the expectations of our clients and nurture long-term relationships; we respect diversity, and we ensure that the modernity our projects bring are in harmony with heritage. We are determined to lead the industry as agents of progress and reliability. In the eyes of our people, partners and clients, WP Development is the symbol of confidence.

There are four things we pride ourselves on: thoughtful design, quality construction, lasting sustainability and real community. Together, they enable us to create intelligent interiors and inspired living that elevates the quality of life for all our residents. With each community and intangible bond between design and function, place and opportunity, our homes provide more than the freedom of their interiors, they present identities. And they are timeless. 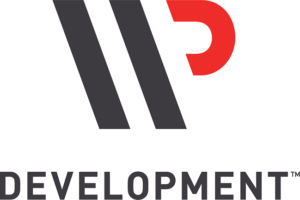