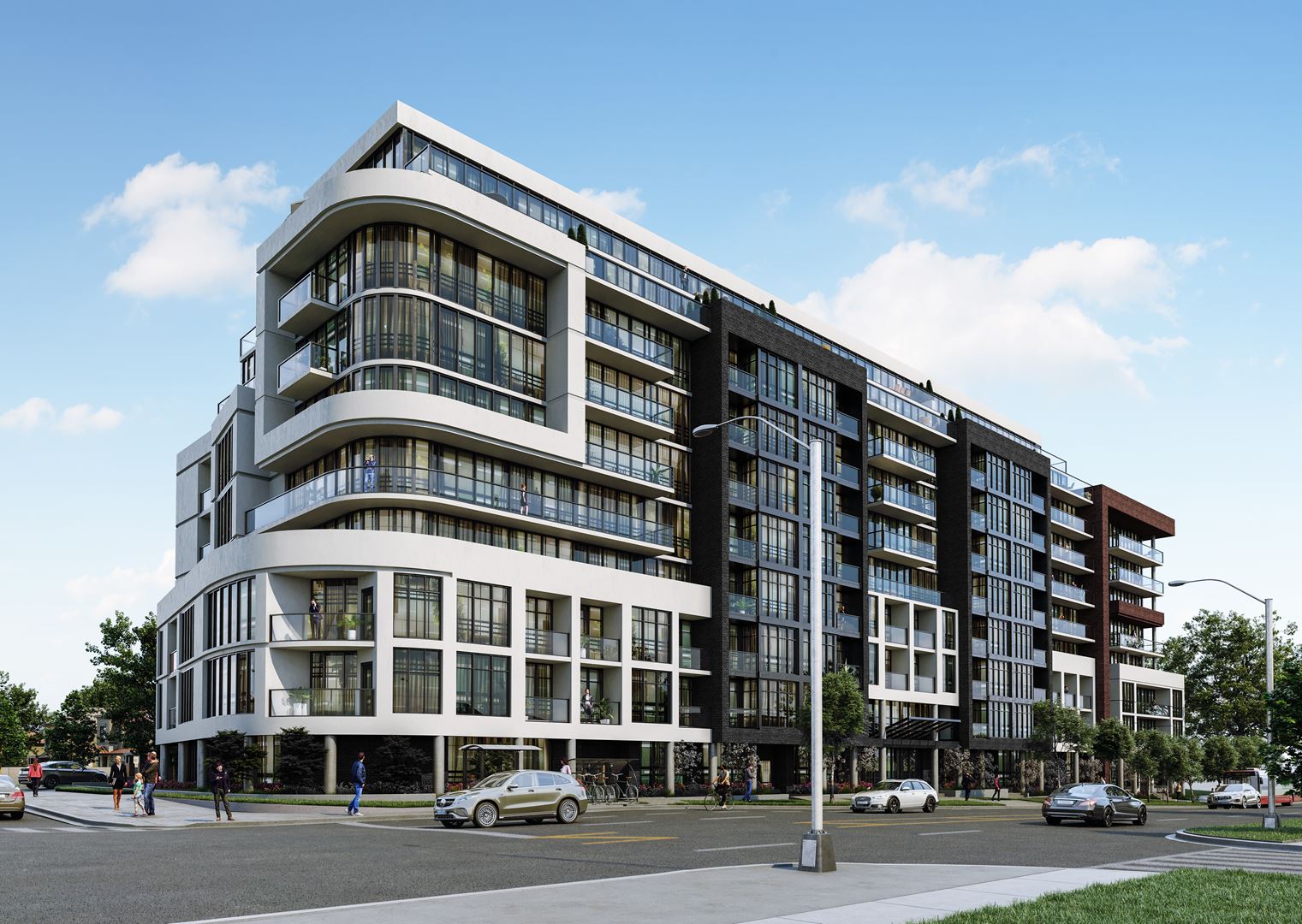 Nahid Kennedy is a new condo development by Nahid Corp currently in preconstruction at 615 Kennedy Road, Toronto. The development is scheduled for completion in 2023. Nahid Kennedy has a total of 213 units. Sizes range from 511 to 1116 square feet. 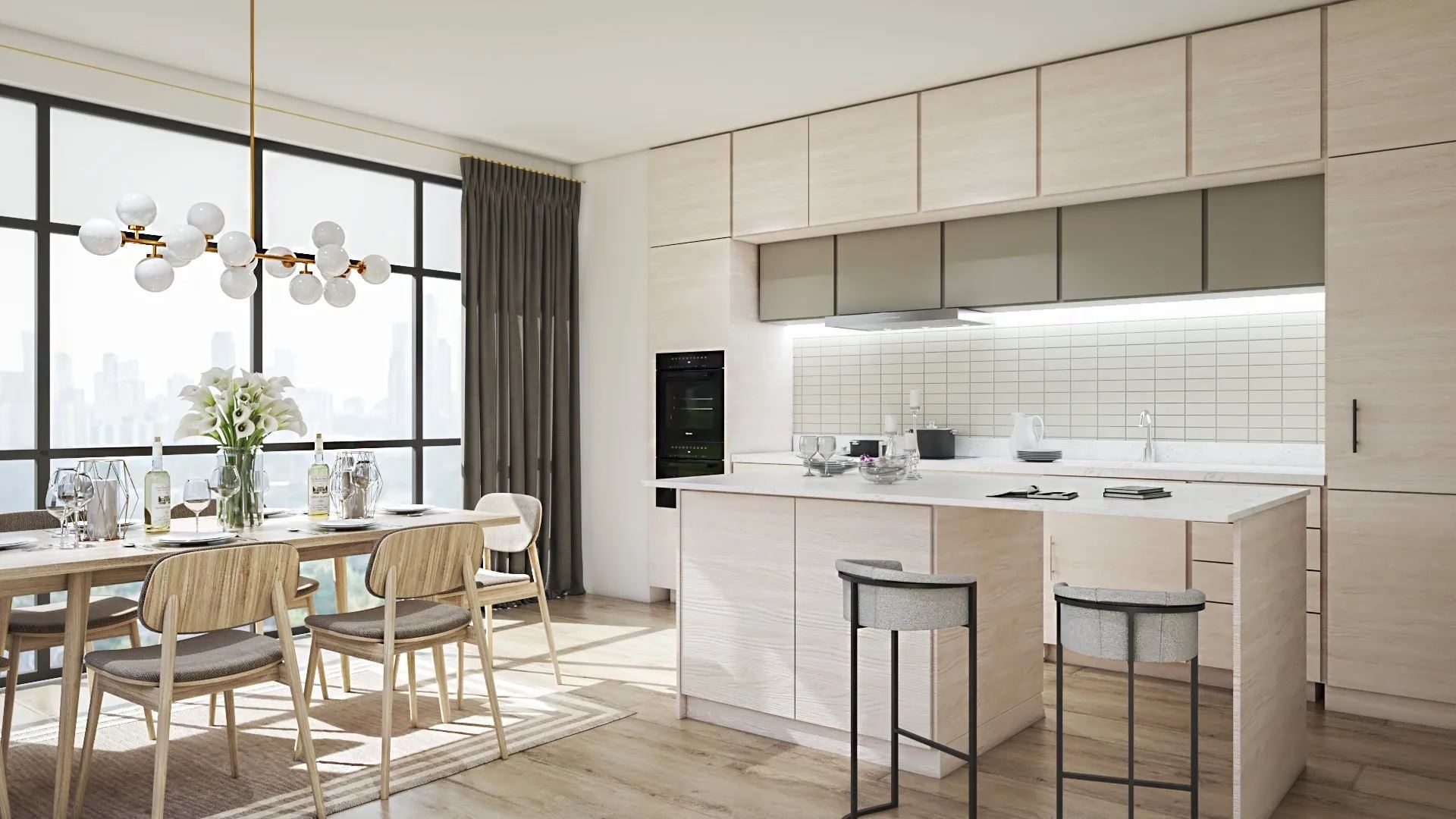 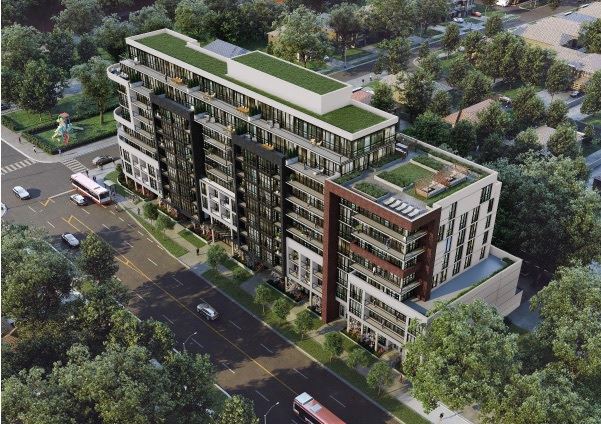 Located at 615 Kennedy Rd., Nahid Kennedy is ideally situated in an evolving neighbourhood, just north of the beautiful Scarborough Bluffs. This 10-storey project offers a wide selection of units of various sizes and layouts suitable for any lifestyle and is equipped with fantastic amenities. Suites range from one-bedroom units to family-friendly three bedrooms units. Whether you live on your own or with a growing family, Nahid Kennedy is an ideal residence for everyone.

STEPS AWAY FROM EVERYTHING

Nahid Kennedy is situated in one of Toronto’s most desirable suburbs and diverse cultural communities, central to major transit, shopping, and entertainment. Just 10 minutes away from Nahid Kennedy you will find yourself at Scarborough Bluffs, with views of the city’s most breathtaking waterfront, ample picnic space and beach access. You can also find several parks and walking trails surrounding the project, including Warden Woods and Taylor-Massey Creek.

Better yet, Nahid Kennedy is only a 10-minute walk from both the Scarborough GO Station and Kennedy GO & TTC Station, allowing for convenient access to downtown Toronto or elsewhere in the GTA. Nearby the building you will also discover countless restaurants and neighbourhood cafes of various cuisines, the Scarborough Town Centre, and the Toronto Zoo. The convenient location of this project offers a fantastic investment opportunity for those who like to be apart of a rapidly evolving neighbourhood.

1. High Transit Score – Residents of Nahid on Kennedy will have immediate access to TTC bus routes right outside their front door. With subway lines. GO Train routes, and the Eglinton Crosstown LRT all easily accessible, rider will be able to travel seamlessly throughout the city. CondoNow acknowledges that residents will be able to commute into the city’s downtown core in just 50 minutes.

2. Plenty of Amenities – Scarborough’s neighbourhood of Kennedy Park offers residents of Nahid on Kennedy access to plenty of lifestyle amenities. St. Clair Avenue East, Danforth Road, and Eglinton Avenue East are all within walking distance and CondoNow notes that The Golden Mile offers nearby dining, shopping, and entertainment options.

3. Easy Access to Downtown – Kingston Road, a major artery into the downtown core, is easily accessible from Nahid on Kennedy, connecting motorists to the Gardiner Expressway. CondoNow states that residents will be able to drive into downtown Toronto and access major employment hubs in just 26 minutes.

4. Green Space – With plenty of surrounding green space, parks, and proximity to the Scarborough Bluffs and Lake Ontario, the residents of Nahid on Kennedy will be able to get away from their hectic daily schedules and relax amongst nature. CondoNow notes that nearby green spaces include Warden Woods, Scarborough Heights Park, and Bluffers Park Beach.

5. Family Friendly – Nahid on Kennedy is located in a very family-friendly area of Scarborough, surrounded by schools of all learning levels along with plenty of recreational and extracurricular activities for children of all ages. CondoNow notes that this the perfect place for families to set down roots and raise their children.

With a notable transit score of 92 out of 100, Nahid Kennedy makes it easier to live outside of the city core while still having convenient access to downtown Toronto or anywhere throughout the GTA. The building is located:

Nahid Kennedy is also central to major highways including the Don Valley Parkway, Highway 401 & Kingston Rd, making it easier for residents who regularly commute by car.

The Nahid Smart provides convenient, safe contactless entry to the building, suite and building amenity areas. In addition, you’ll have the ability to remotely control access to your suite entry doors from anywhere in the world – whether you’re 2 feet away or 2 thousand miles away.

No more missed packages. Parcel Scanning Technology lets couriers safely enter the building simply by scanning the parcel, so you can receive your packages the first time, every time.

Forgot your keys or phone? No problem. Opting in to Facial Recognition entry lets you enter the building with only a smile.

See who’s at the door, before letting them in! 1-way video calling from the Entry system to the Resident App with an option to add video at your suite door.

Connect with other residents and easily access building news.

Nahid Kennedy offers a fantastic array of indoor and outdoor amenities suitable for all types of lifestyles. 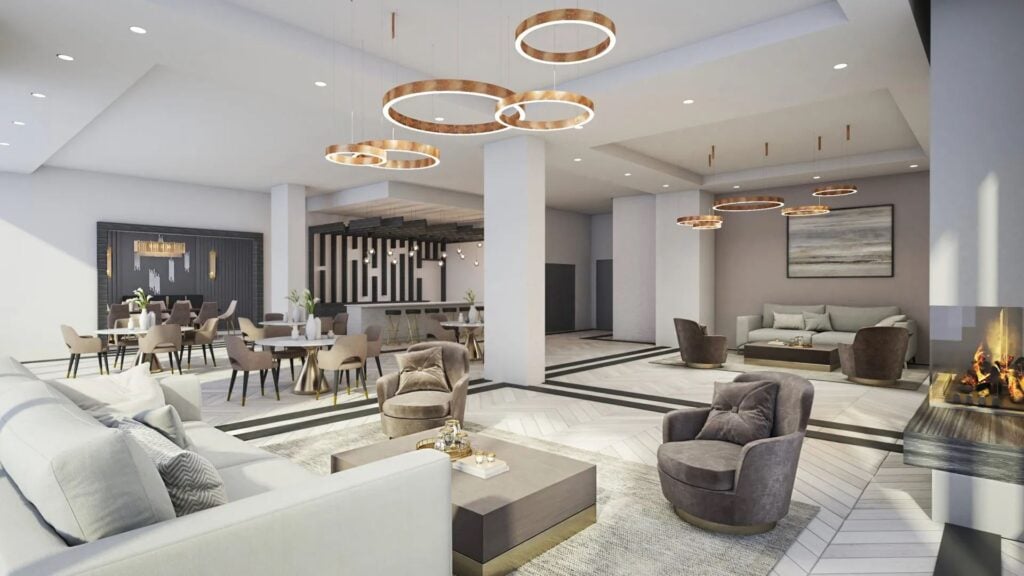 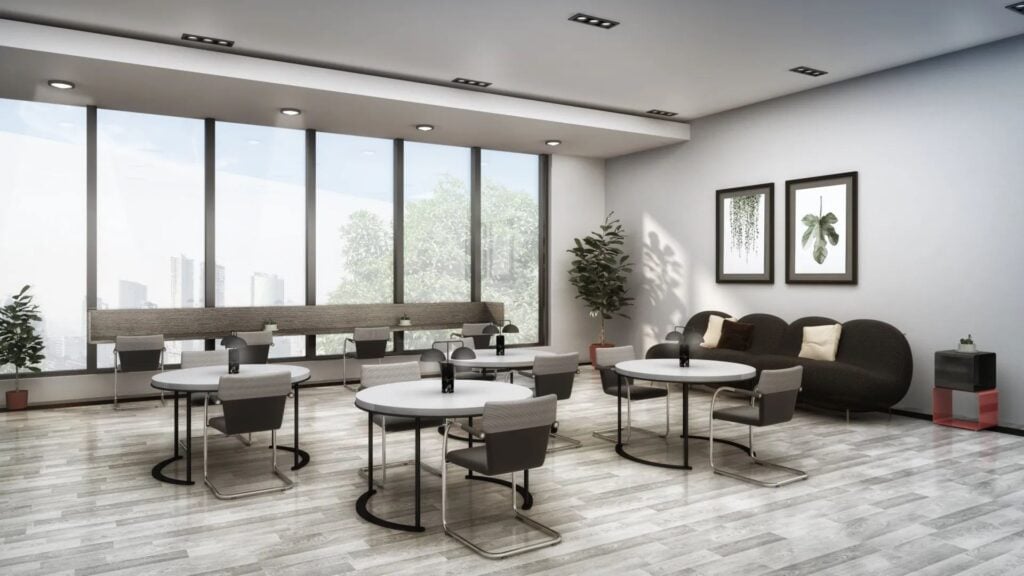 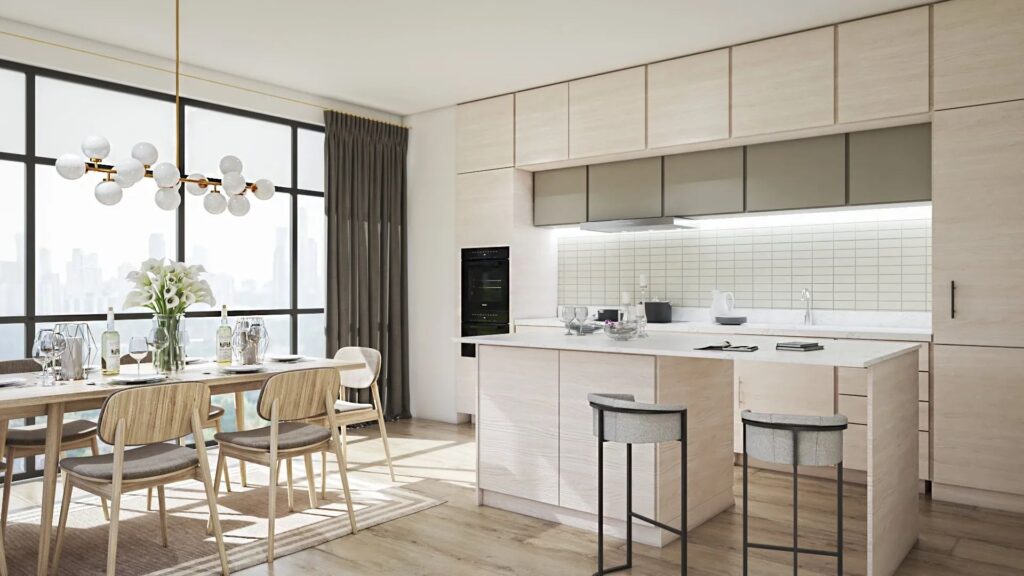 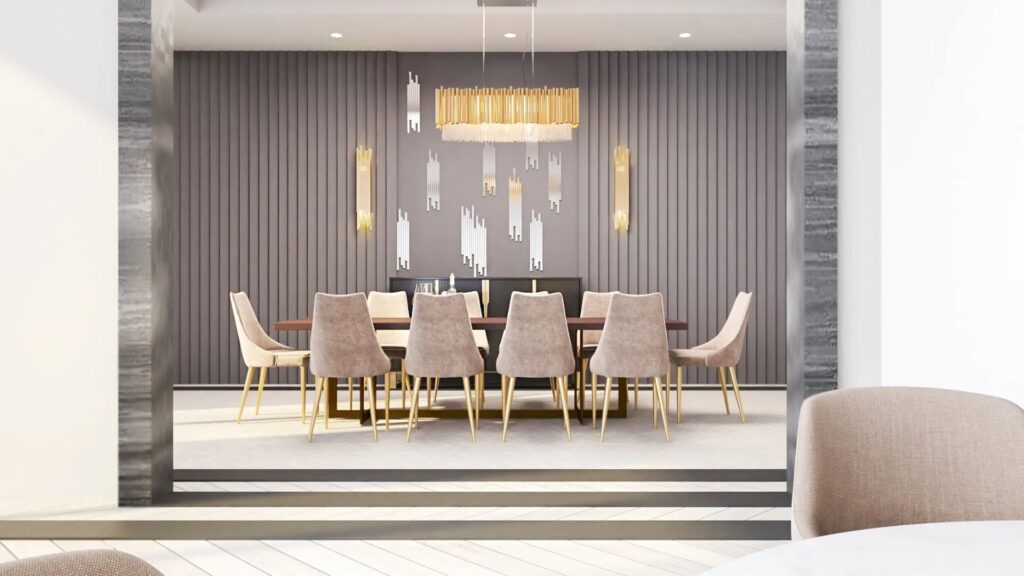 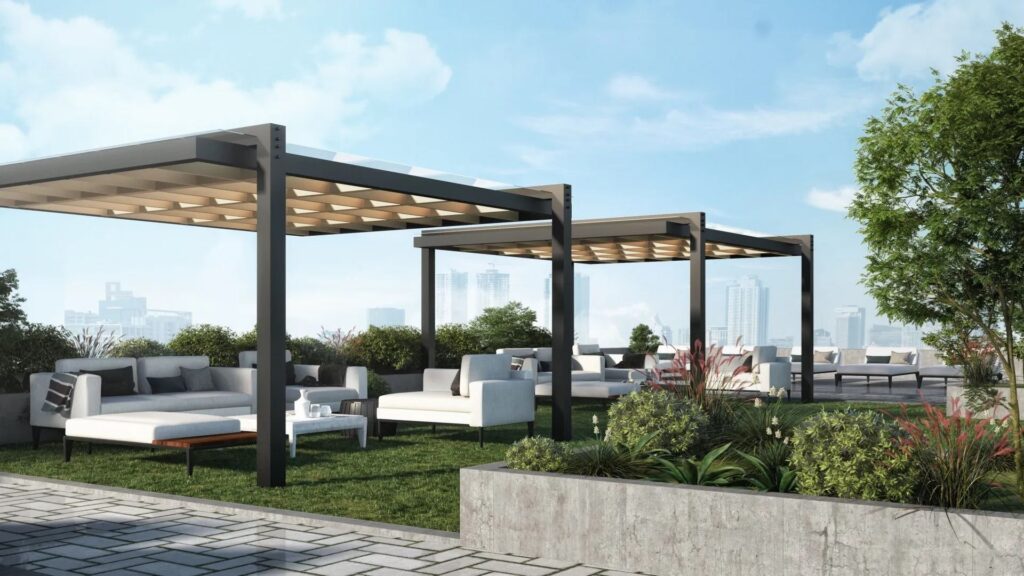 Nahid Kennedy Condos will feature a modern exterior that blends disparate color and border elements into a single, cohesive design. This condo looks to rejuvenate this venerable Scarborough community by introducing retail outlets as well as an eye-catching, forward-thinking design.

The exterior of this 10-storey mid-rise impresses at first glance with its tri-colored highlights and an elaborate facade made from copper-hued metal plates and pre-cast concrete. Inside, the condo remains equally impactful with 213 unique layouts to choose from. These units will come in a wide range of sizes including one bedroom to three bedroom plus den and between 511 to 1,116 square-feet. 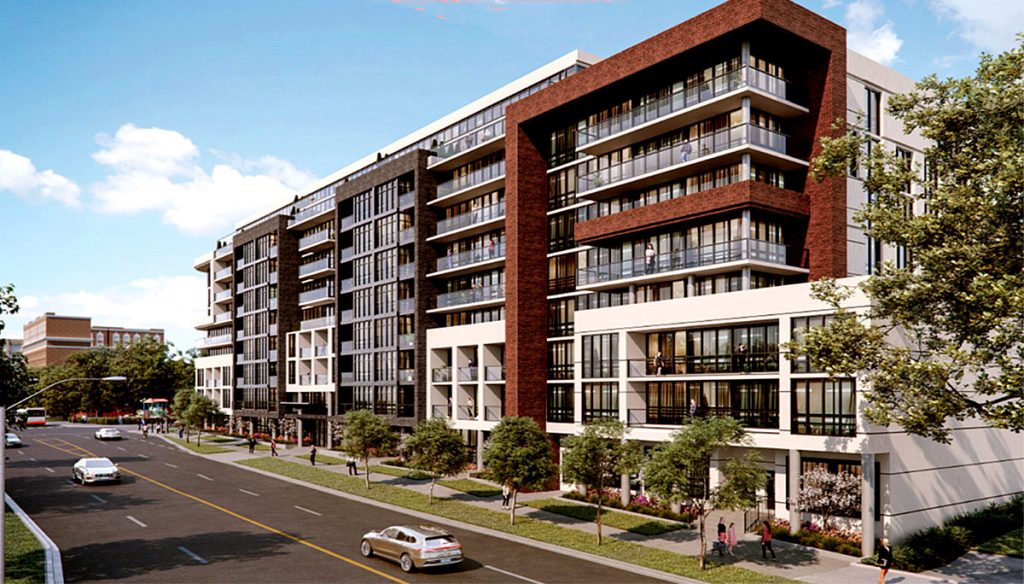 The development features four ground-level retail units that front along Kennedy that combine for a total space of 498 square metres. There will also be many indoor and outdoor amenities that will suit any lifestyle including a rooftop terrace with barbecues, fireplace, lounge and dining area, a fully equipped fitness centre and yoga room. Some of the other lifestyle amenities will include a fully-furnished party room with a dining area, bar and lounging area, a study room, and a private dining room. These modern amenities will give residents the chance to unwind, entertain and socialize, all from the comfort of their own building.

Location & Neighbourhood
Two nearby GO stations provide local residents with GO train service, while the area’s legacy for hosting commercial and industrial zones have culminated in the formation of Scarborough’s Golden Mile, a major shopping centre.

Closer to home, local residents have full access to a number of nearby amenities located along up and down Kennedy Road that include a pharmacy, coffee shops, restaurants, and a supermarket. Meanwhile, the Corvette Junior Public School and Corvette Park are located just down the street while the Kennedy Road Kiddy Care provides day care just across the street.

This 10-storey building offers a wide selection of units of various sizes and layouts suitable for any lifestyle and is equipped with fantastic amenities. Suites range from one-bedroom units to family-friendly three bedrooms units. Whether you live on your own or with a growing family, Nahid Kennedy is an ideal residence for everyone!

Highlights at Nahid on Kennedy

Nahid Kennedy is situated at St. Clair & Kennedy Rd. in one of Toronto’s most desirable suburbs and diverse cultural communities.

This location is in the Kennedy Park neighbuorhood in Toronto. Surrounding the building you will also discover countless restaurants and neighbourhood cafes of various cuisines, the Scarborough Town Centre, and the Toronto Zoo. Just 10 minutes away from the building you will find yourself at several walking trails and parks, including Scarborough Bluffs where you’ll have views of the city’s most breathtaking waterfront, ample picnic space and beach access.

⁣Nahid Kennedy is only 5 minutes away from both the Scarborough GO Station and Kennedy GO & TTC Station, allowing for convenient access to downtown Toronto or elsewhere in the GTA. Better yet, Nahid Kennedy is steps away from the future Eglinton Crosstown LRT, which will feature 25 stations across Eglinton Ave and make travelling across the city 60% faster than before!

Scarborough's most sought after location