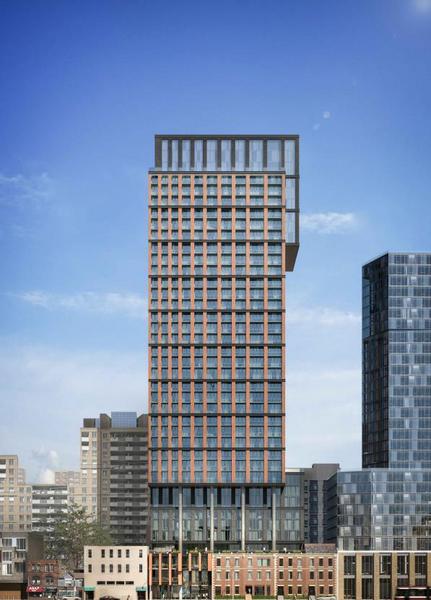 MODE Condos is a new condo project by CentreCourt Developments and is currently in pre-construction. MODE architect is designed by IBI Group. The new project will be located at 199-201 Church Street in Toronto. The major intersection is Church Street and Dundas Street East. 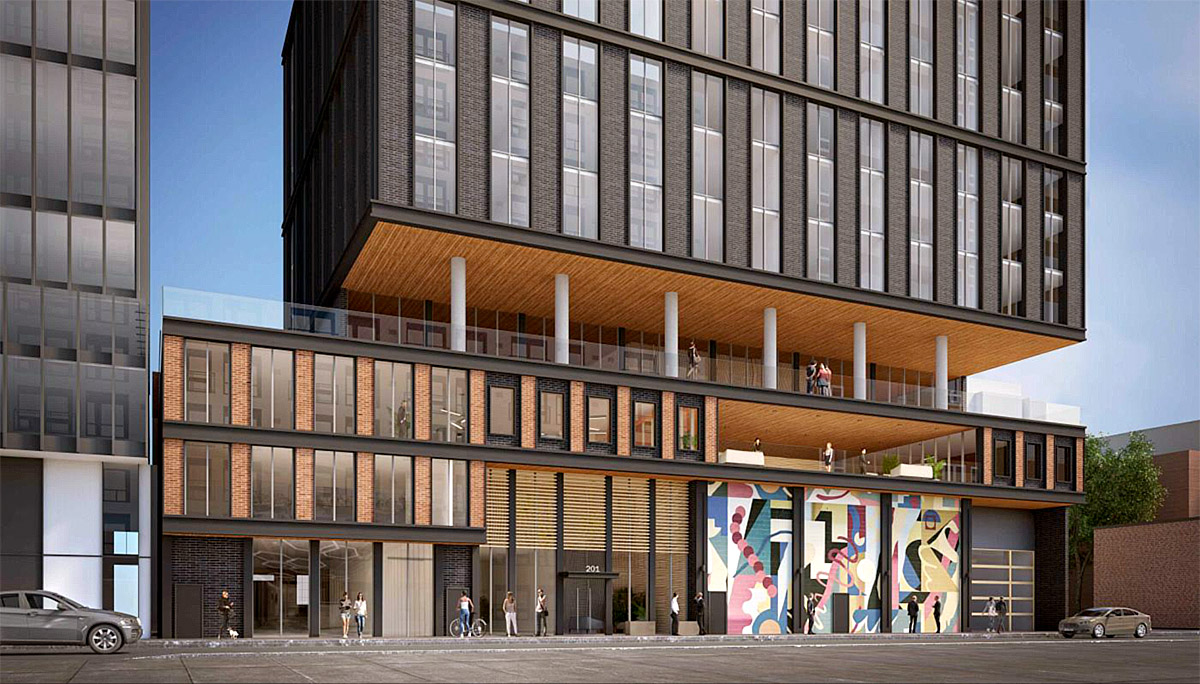 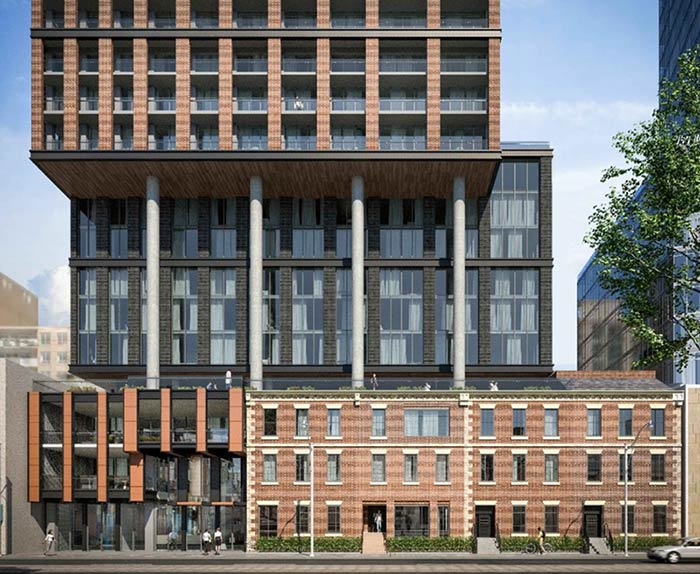 MODE Condos is a new condo project by CentreCourt Developments and is currently in pre-construction. MODE architect is designed by IBI Group. The new project will be located at 199-201 Church Street in Toronto. The major intersection is Church Street and Dundas Street East.

MODE Church and Dundas Condos will be 37 storey tower with 478 mixed condo units. Units will be a mix of 79 studio, 266 one bedroom, 82 two bedroom and 51three bedroom. The estimated completion date for MODE Condos is still unknown.

MODE Condos have underground parking garage which will contain 79 spaces.

Live the life you’ve always wanted. Change downtown from a destination into a lifestyle. Experience the best the city has to offer — all by choosing this luxury residence where your ideal life is waiting for you.

At this premium address, at the literal heart of the city, everything lies just moments away. By choosing this condo, residents make the switch from commuters forced to leave downtown to being part of an exclusive community.

Live each day at the heart of it all and feel the pulse of the city. Suit up for professional requirements by day, and let your hair down by night — all in the same neighbourhood.

This luxury condo made by CentreCourt Developments is planned to stand 37 storeys-high and contain some 478 suites. In addition to boasting an unrivalled location, MODE Church And Dundas Condo project also has the distinction of becoming one of the city’s more distinctive skyscrapers.

Featuring an asymmetric facade with a evocative horizontal contour placement that instills a strong sense of dynamism, this unique condo is a new construct that builds upon an existing 4 storey-high heritage building. As a mix of old and new, this future landmark boldly leads by example as it respectfully pays tribute to the past, melding its brick highlights in with its venerable predecessor.

And, if CentreCourt’s other luxury condominiums are any indication, MODE Condos will be just as full of premium features and cutting-edge design as its eminently designed siblings.

With more details still to come, it remains clear that this is a rising real estate investment. Simultaneously regal yet practical, eye-catching yet modest, this spectacular condo is set to become the next new hot commodity in the downtown pre-construction condo market.

A long list can be made detailing the many impressive shops and businesses located in the vicinity of this condo, but the truth is that when you are in the centre of it all, you become the centre. Here, from the inside looking out, things are either downtown — or they’re not.

For local residents here in the Garden District, the former points to a wealth of conveniences that are always available to an exclusive downtown crowd who experience life without any commuter lag. Unchained from the hassles of driving and parking, able to experience the city freely instead of as a series of destinations to muscle your way towards, it’s clear why this address has been awarded the unrivaled “Walker’s Paradise” Walk Score of 99, signifying that daily errands do not need a car.

Nestled in the thick of it all, residents here have their pick of the city’s best shopping, bars, and restaurants; here, residents can accomplish much of everything they need to do at local drugstores, post offices, and supermarkets like Metro and Longo.

More so than convenience, this address has the prestigious advantage of close proximity to the city’s top landmarks.

In less than 5 minutes, residents can walk to the city’s top meeting area Yonge-Dundas Square, the city’s long-running downtown retail centre Nordstrom Toronto Eaton Centre as well as a 24-screen multiplex movie house. Meanwhile, the downtown campus to Ryerson University lies immediately to the north of Dundas, while St Michael’s Hospital and a Canadian Tire can also be found within this golden perimeter.

In less than 10 minutes, residents can walk to such important city centre landmarks as Toronto City Hall, George Brown College, Allan Gardens, and Cabbagetown neighbourhood to the east. In less than 30, residents can reach the campus for University of Toronto as well as Yorkville at Bloor and University Avenue.

At this point down the page, this list will only get longer, but it also gets more impressive.

World-class entertainment and cultural venues within walking distance include the Ed Mirvish Theatre, Massey Hall, the Elgin and Winter Garden Theatre Centre, The Senator Jazz Bar, the Art Gallery of Ontario, the Phoenix Concert Theatre, and the Sony Centre for the Performing Arts.

In addition to local fitness clubs, residents can opt to stay in shape at the nearby Toronto Central YMCA. Likewise, local parks in the downtown core include Trinity Square Park and its public labyrinth, St James Park, and Grange park. Residents even have the option of going for a breath of fresh air at Riverdale Farm or even on Centre Island, reachable within 44 minutes by ferry.

Church and Dundas is also home to a number of public institutions. Local public schools include the Elementary School Gabrielle-Roy and Jarvis Collegiate Institute, while the Bond Street Nursery School will cater to preschoolers. At the same time, the downtown core is home to a number of hospitals that include St Michael’s, Toronto General, the Hospital for Sick Children, Mt Sinai, and Women’s College Hospital.

And yet, even with most everything located within walking distance, locals have the option of using a world-class public transportation system, one that is recognized as a “Rider’s Paradise” with an unsurpassable Transit Score of 100.

Dundas Station is located 5 minutes away by foot, while Sherbourne Station can be reached in just 17 minutes by bus. Streetcars are consistently plentiful and can be found on Dundas and Queen to the north and south, both reachable within a 4 minute walk. Getting to Union Station will take 12 minutes by bus, while a trip to the Pearson International Airport will take 43 minutes by UP Express train. As well, a 9 minute walk will take residents to the Greyhound Canada Transportation Centre that provides service to locations across Ontario and USA.

But for all the use that listing time intervals will do, words fail to describe the change that condo residents will feel by choosing to live here. Living downtown provides an immense satisfaction that has to be experienced rather than explained. It’s a lifestyle of immediacy and of vibrancy, and it’s available to everyone who chooses to live at MODE church and Dundas, the condo that provides the ideal urban lifestyle.