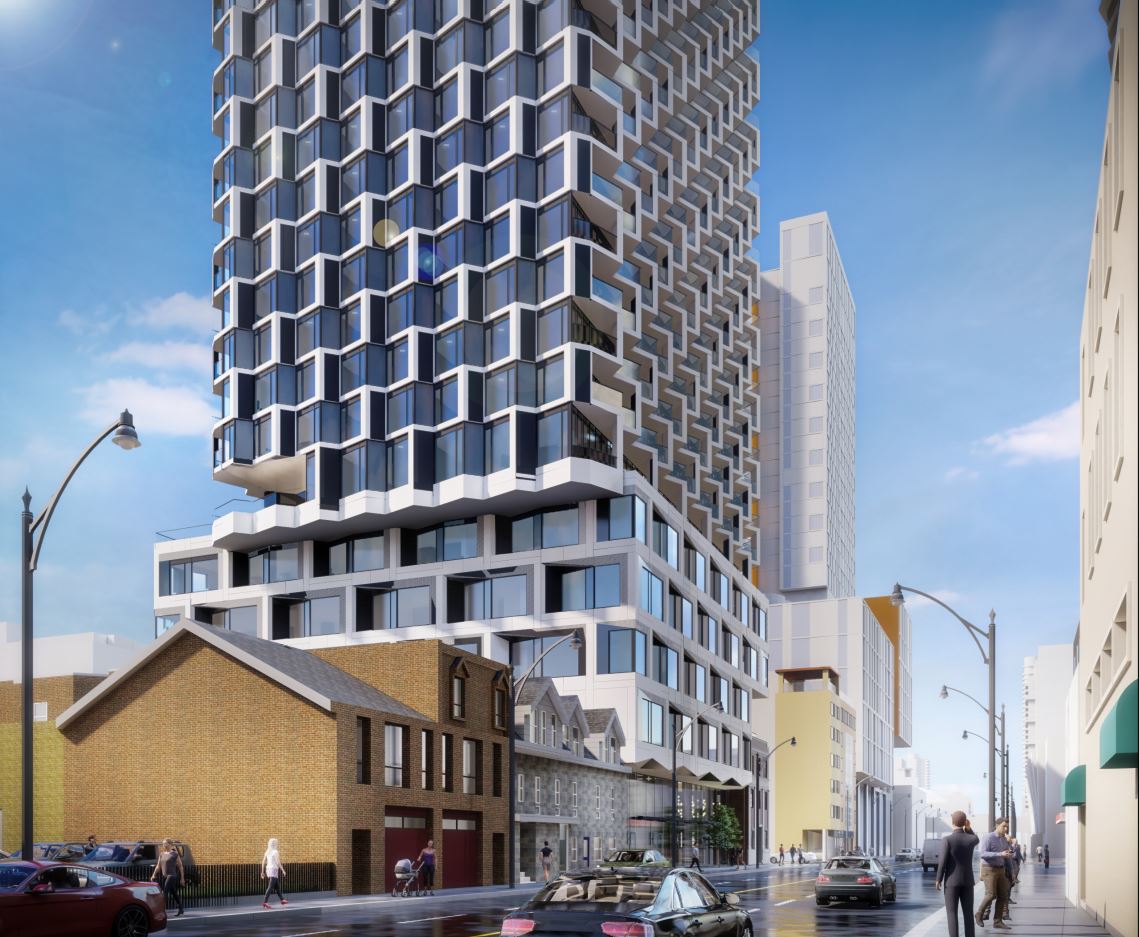 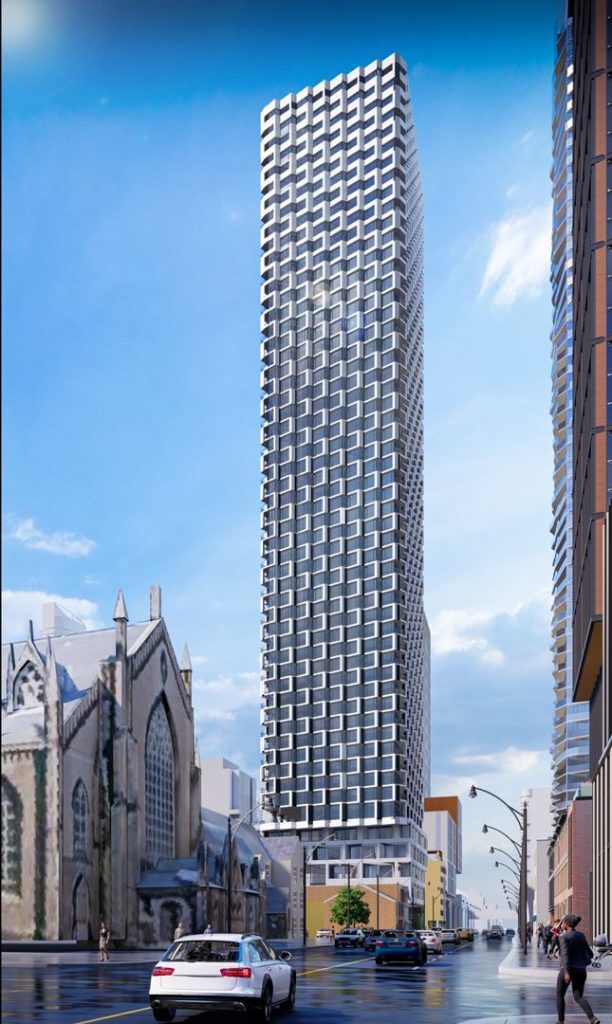 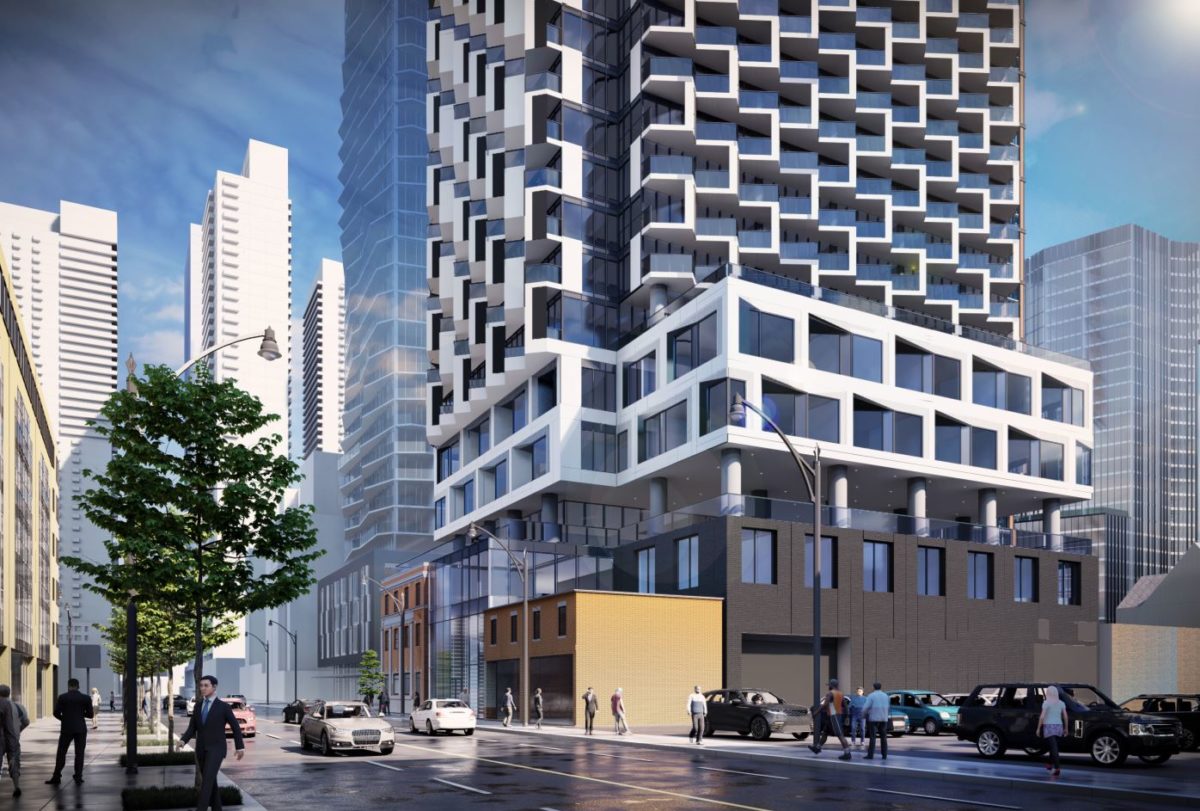 For Toronto’s multitude of university and college students, searching for a rental apartment close to campus without breaking the bank can be like finding a needle in a haystack — a student budget amongst limited housing supply can easily price you out of downtown’s expensive market. One recently proposed condominium tower, however, could bring some relief.

The 1,920-square-metre site in question, located on the southwest corner of Dundas and Church streets, is currently occupied by a surface parking lot, Pizza Pizza restaurant and Nishnawbe Homes, a supportive and affordable housing facility for aboriginal people. The future development plans to dedicate 16 of the residential units and associated space on the first and second floors to Nishnawbe Homes as a community benefit.

The three-storey building that Pizza Pizza occupies at 260 Church Street was originally constructed in 1913, and is “a representative example of early twentieth century Edwardian bank branch architecture,” according to the project’s planning rationale. When built, the development would maintain and restore the facade of the historic building.

The rectangular tower proposed in the renderings shows a series of angled windows and balconies with glass barriers framed by white exterior siding. A total of 42,728-square-metres of residential space would be provided, which would include 210 bachelor, 292 one-bedroom, 97 two-bedroom and 65 three-bedroom suites. This wouldn’t be the first collaboration between CentreCourt and architecture firm, IBI Group, who are also working on 55 Mercer Condos, Mode Condos and Liberty House Condos together.

As this city intersection sees high levels of pedestrian traffic thanks to the nearby Ryerson University campus, Yonge-Dundas Square and St. Michael’s Hospital, the planning report explains that the addition of new residential units would bring more housing options to the neighbourhood.

“The residential units being provided will take advantage of the nearby transit services and will serve the growing population of the downtown as well as the increased demand for housing to serve the growing student population associated with Ryerson University,” wrote land use planning and development providers, Goldberg Group.

In the same neighbourhood, Fleur Condos is expected to wrap up construction on its 29-storey condo tower by July, along with Max Condos, a 38-storey project that’s expected to be complete by June.